My scribbled notes with a sprig of a plant called “Stinky Bob” on top. And stink it did. Smelled like burning tires.

Last Sunday afternoon I went on an educational hike through a greenbelt in South Seattle.

It was kind of a last minute plan, but well worth it to take advantage of the beautiful weather we’ve been having. I had an open afternoon, and was excited to see that one of the events I’d saved on my Facebook page would neatly fill that spot.  Evergreen Edible and Medicinal Plant Walks was holding an event at Cheasty Greenspace at Mountain View. I messaged Jonathan Hover through the Facebook page Saturday night and reserved my spot.

I’ve become increasingly brave about eating berries and handling the foliage. I picked up a book titled, Foraging Washington, but still don’t feel confident in my abilities to tell plants apart from a photo in a book. So this walk was the perfect opportunity to enjoy learning about plants from an expert.

The Cheasty Greenspace is a hidden treasure of hiking area I can’t believe I hadn’t explored yet. It’s right off the Columbia City Light Rail Station, and a short drive from where I live.

We started at the trailhead just off of Mountain View Drive South and took the Hazelnut Trail loop, and up the Columbian Way Link, then back down again.

Along our walk, Jonathan Hover, the host of Evergreen Plant Walks, pointed out a variety of plants, which we touched and smelled and nibbled and tasted. Our little group of about eight had a great time taking notes and photos along the way. Jonathan provided us with a great handout with information about how to tell plants apart, and what the notable plants in the area would be.

Though the handout has been great to look over as I write this, and will be awesome to share with my Cub Scout Pack,  I’m glad I brought a notebook. And a water bottle. Some of the plants were a bit bitter and/or left a less than pleasant aftertaste.

If there’s one thing I’ve learned from being a Scout Leader, it’s the importance of being prepared. Sturdy hiking shoes, long pants, bug repellant, a hat, and a light jacket are good on these hikes as well. Blackberries and other clinging and stinging plants were to be found all along the trail, and mosquitoes were out as well.

Plants on the hike

My favorite tasting of the green plants we tried was the Sweet Cicely. It was just going to seed, so we tasted both the seeds and the leaves, which tasted and smelled of anise, or licorice. It’s in the carrot family, and unfortunately could be mistaken for Poison Hemlock. So while I enjoyed this treat on the trail, I’d be wary of trying it while out on my own.

Miner’s Lettuce was also tasty, and one of the least bitter greens we tried. I’d heard of it, but hadn’t tried Miner’s Lettice before, so I was happy to finally have it pointed out to me. It has pretty little flowers which are distinct and easy to identify, and the leaves looked exactly like I’d seen in photos. It is available all summer long, which is also great to know for my foraging experimentation in the future.

We also tasted Red Cedar leaves. The fresh, green leaves were beautiful and had a bright, strong flavor. They’re good for making into a tea for a mucous and coughs. Red Cedar is also anti-fungal. It’s no wonder the natives of the Pacific Northwest used it so heavily. It’s really a remarkable tree.

I didn’t know that all young, bright green, pine needles are edible (the one exception is Yew trees). The needles of the Hemlock Tree (not to be confused with Poison Hemlock, a relative of the carrot as mentioned earlier) were quite good.

We also tried the root of the Licorice Fern, which started out sweet and rather yummy, then turned extremely bitter. Wild Lettuce was also rather bitter, though it had gone to seed, so I’d like to see what it tastes like in early spring. The final edible plant of note, was the Dandelion. I didn’t particularly like the leaves, but the flowers were surprisingly mild, but must be eaten on the spot or soon after picking. 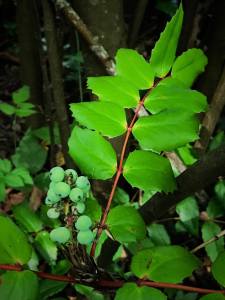 Jonathan pointed out many berries and other edible plants that weren’t in season. We found Thimble Berry Plants, Red Huckleberry, Hazelnut trees, Wild Rose, Blackberries, Black Cap Raspberry, Salal, Indian Plum and a great deal of Oregon Grapes. The berries, rosehips, nuts, plums, and grapes were all in various stages of bloom, or not-quite ripeness.

We talked about thistles, nettles, and a variety of other plants we found along the way.

There was so much information to digest and remember. I’ve been observing plants and getting to know the local varieties for quite some time, but there is still so much to learn. I’m looking forward to one of the upcoming walks, which are held every Sunday at 3 pm.

Be sure to check out Jonathan’s page, EvergreenPlantWalks. There are currently three more plant walks scheduled for June. June 11 at Lincoln Park, June 18 at Ravenna Park, and June 25 at Seward Park. The cost is just $15, children 13 and under are free.

About Jonathan Hover
of Evergreen Edible and Medicinal Plant Walks

Jonathan grew up in south Seattle, and has always had a passion for the natural world. He attended the Intro to Western Herbalism program at the Rocky Mountain Center for Botanical Studies in Boulder, Co. from 1999-2000, and received a certificate in Advanced Herbalism from the North American Institute of Medical Herbalism in Boulder, Co. in 2003. He has studied the uses of northwest native plants for the last 15 years, and have led plant walks professionally on Orcas Island, Seattle, and the Cascades.

The goal of his walks are to be accessible and affordable to all who are interested. $15 sliding scale, open to trades, nobody refused for lack of money, children 13 and under free. The event will be limited to 15 people.

*Apologies if you received an unedited version of this post in the email alerts on Monday. I accidently clicked “post” while reviewing, instead of “save.”